This volcano I was sure would be amazing -the aerial shots of it are rather striking. Maybe it’s because I didn’t properly conquer it (just drove to the top and barely circumnavigated the cones) but I found it kinda boring and a little bit creepily isolated. There’s no definite point of interest and no pedestrian path beside the roadway yet there were enough people coming and going (in their vehicles). 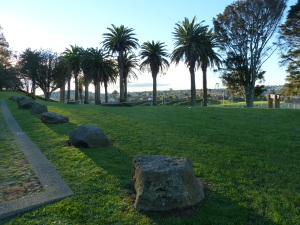 Near the entrance. Interesting subjects for linear perspective vanishing point

I had no end of trouble trying to find this one -far out, the jolly thing isn’t even called Mt Roskill on the map but some Winstone Park in honour of the last European fulla to have owned it but who so kindly gave it to the council in 1928 to be a recreation reserve. My journey started out at Three Kings and went via Mt Albert (& Unitec) and just as I was driving down Dominion rd towards it, had it in my sights and everything, I had to go and turn right a few metres too early and ended up on the West bound on-ramp of the North Western motorway. Not to worry, volcanoes are round and I have a good sense of direction so I didn’t even need to stop and check a map but decided I would approach it from the other direction. Even knowing it was coming up and being in the correct (left) lane, I still had to make a last minute swerve to avoid the beckoning gulf of that dreaded on-ramp looming up ahead.

Steepness! On the all too common boulder-lined drive.

Finally I was on Winstone Park Domain soil! But still in my car and not wanting to be in the way I just sort of pointed my car forward and drove up the hill and when I reached a safe place to park, I got out and had a wee wander. It’s Auckland from another point of view, on a lovely clear late afternoon.

The hairy mop of Mt Albert silhouetted against the setting sun. Aaaaand that New World supermarket down on Stoddard Rd gets fresh goat meat in every Tuesday.

This North facing view is taken from the highest point on the South side accessed by a short track and over a stile & another tiny track -it’s pretty obvious once you’re there. Mt Roskill was named by Alexander Kennedy, the first European to give Puketapapa a name, after Roskhill in Scotland but was sometimes known as Mt. Kennedy in the 19th century. In pre-European times there were two shallow craters on the summit and earthworks & pits round about but that all pretty much went when the water reservoir was installed inside the craters -yeah, the flat tops ain’t natural, surprise, surprise. 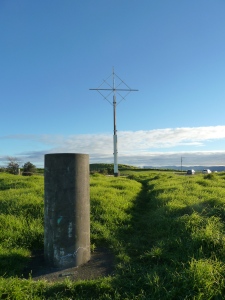 I confess that I do not know the significance of this rock plonked by the entrance. I thought there might’ve been some plaque or description on or nearby but I could see none. Maybe it’s as simple as “Hey! this mountain used to be a fire-spewing, rock-chucking volcano so just you look out, you”. And please appreciate the length I went to to snap this for you. You can’t tell but I’m basically perched on ledge 2metres high and one wrong move & I’d be sprawled in the traffic. Don’t tell Mum! (Hi Mum, just checking that you read my blog -you know I’m pretty nimble on my feet and trust my climbing instincts ay?) 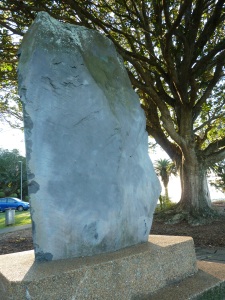 The random rock of importance.